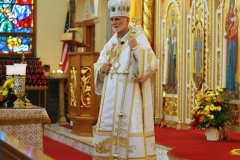 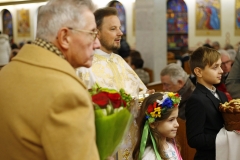 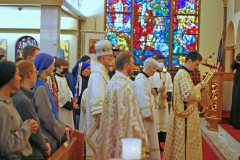 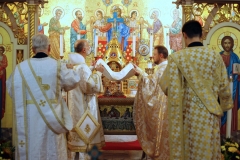 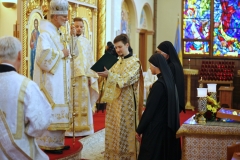 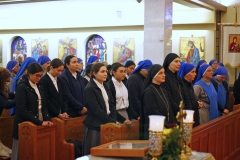 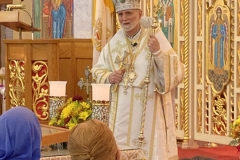 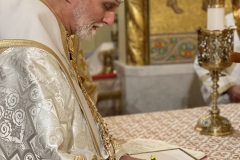 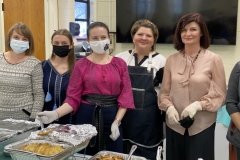 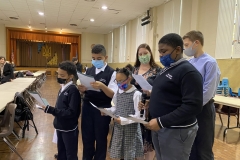 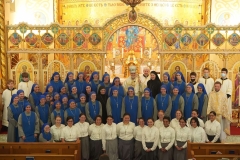 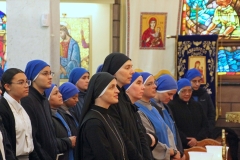 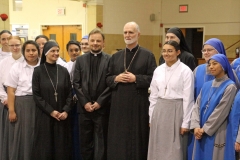 On Sunday, November 28, 2021, Metropolitan-Archbishop visited the Ukrainian Catholic Church of the Assumption of the Blessed Virgin Mary in Perth Amboy.
Rev. Ivan Turyk, Deacon Paul Makar snd parish trustees welcomed the archbishop to the parish at the door of the church. Two children welcomed Metropolitan Archbishop Borys Gudziak with bread (on traditional Ukrainiancloth), salt, and flowers. This long-standing Ukrainian tradition symbolizes eternity (bread) and hospitality (salt). Pastor of theUkrainian Catholic Church of the Assumption of the Blessed Virgin Mary, Rev. Ivan Turyk presented the archbishop with a cross.
Archbishop Borys Gudziak, Rev. Ivan Turyk, celebrated the divine liturgy with the assistance of Deacon Paul Makar, Deacon Volodymyr Radko, and several altar boys. In attendance at the service were over 55 nuns including Mother Mary of the Immaculate Conception Ambriogio, Provincial Superior of the Sisters Servants of the Lord and the Virgin of Matara SSVM and Sister Veronica who will begin their ministry at the parish. Members of the parish welcomed the archbishop and the visiting sisters. The sisters come from all over the world to join their order. They are Latin Rite and wear blue and grey. These two different colors signify Jesus as both divine (blue) and his humanity (grey). Sister Veronica and Sister Maria wear the black habits because they belong to Byzantine Rite branch of the order.
Archbishop Borys’s sermon was on the day’s gospel Lk 13:10-17 which is about a woman who had been humped over for 18 years. The woman entered the synagogue and Jesus called her over to him and he healed her. This made the synagogue leaderjealous, so he complained because Jesus healed on the Sabbath. Jesus calls him a hypocrite stating that the woman has a right to be healed after 18 years of being bound by her disfigurement.
The archbishop stated, “The American slang would be, “Give me a break!” He continued, “All of our prayers, abstinence, self-denial, sacrifice – love of God and love of your neighbor. Religion comes from the Roman (Latin) word ligare – to join(reconnect). Jesus wants our heart. He gives us the love of God. Jesus is saying, “Give me a break! You tell me about rules of the Sabbath. The woman has been in pain for 18 years.” Rules keep order the community. But if the rules get in the way, sometimes the rules need to be suspended. Rules are our comfort zone. Our Lord is not negating the law. There is one fundamental criteria – love. Love is always for others. You can’t love all by yourself. God is a relationship. In God, there is love. Jesus is a relationship with the Father and the Holy Spirit. We are living in a time where we have all these rules – vestments, robes. There is true love – God is calling us to come back to Him – to love. There is no more radical counterculture movement in the 20th(and 21st) century when a woman becomes a nun. You have in your order more than fifty women when everything is crying money, power, sex – you are obedience, poverty, chastity. We pray for you, sisters. We have great trust in God and the community. We pray through your ministry in Perth Amboy that you have many vocations. We see something we only have by grace. Be armed with the word of God. The life of the church is only beginning. It is only 2,000 years old. The church is very young. The universe is billions of years old. Maybe around 20,000 years from now, people will talk of the early years of the primitive church. God bless you!”
At the end of the divine liturgy, Archbishop Borys blessed Sister Veronica a Superior of the convent in Perth Amboy, NJ and Sister Maria for the beginning of their ministry in Perth Amboy. The nuns in attendance sang the prayer, “Hail Mary,” in old Slovanic.
After the liturgy, there was a reception at Assumption Catholic School cafeteria prepared by parishioners and ladies from the Ukrainian National Women’s League of America ( UNWLA) branch 135. Assumption Catholic School Principal Mrs. Lissette Shumny and several school children presented ArchbishopBorys, Rev. Ivan Turyk, Mother Mary and Sister Veronica with flowers and a song.
After eating lunch, some of the sisters who attended the service got up on stage to sing. One spiritual hymn was, “Down by the Water Side We Meet,” while the postulates sang, “I Saw the Light.” It was a pleasant day for all.
Article written By: Katherine Massopust